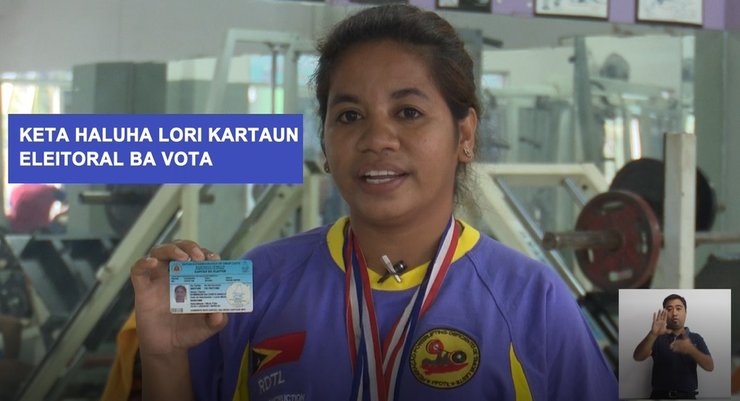 IFES supported the Timor-Leste National Election Commission (CNE) to produce, film and edit a voter education video titled “Make Sure You Vote” featuring youth athletes encouraging viewers to vote in the May 12 parliamentary elections. The video features a sign language interpreter, making the voter education message accessible for viewers with hearing impairments. IFES’ work in Timor-Leste is supported by the DFAT Supporting Timorese Election Management Bodies for the 2018 Elections project. An English transcript of the PSA, which is in Portuguese is available below.

Lirio Junior, Footballer: We love our football. We like watching it and even though everyone is occupied with their own activities, however, it’s important that you go back to vote on the 12th of May this year.

Liliana, Marathon/Basketball Paralympian: To vote, don’t forget to bring your electoral card with you or your identity card with your RDTL passport.

Ninhas, Horse rider: During the election, there will be a voting station in every suco and make sure you go to your voting center to vote.

Alexandro, Motorcycle Rider: Voting starts at 7am until 3pm. Don’t be late!

Lirio Junior: Vote according to your conscience.

Alexandro: Vote for your future.

Ninhas: Your vote can make a difference and can bring prosperity.

Closing Title and Logo: This announcement is produced by the National Election Commission

Contributing a Voice Voter's Bill of Rights Voting Process Factsheet on Voting Easy Read Political Party Manifestos I have the right to vote Why Sign Languages Matter for Electoral and Political Rights: New Tools to Engage Deaf Communities Voting on Election Day Pocket Guide for Voters Voter Education for Local Elections
Thank you for helping us.